I refuse to go on diets.  As Garfield the cat once proclaimed:  Diet is Die with a ‘T’.  I prefer to refer to it as a “watchful” eating plan.  I will watch what I eat.  Most often this entails watching myself inhaling pizza or continuously devouring a plate of french fries.  Yes, I have watched myself do this many times.  However, as I age, I do realize that I should be adding fibre into my daily meal plans.  I have also introduced yogurt with some fruit on a daily basis (this is day two, in case you are wondering how long I have been at it).  I have determined that I need more vegetables in my daily eating habits as well.  As such, I have deemed Asian food to be my “go-to” as I do love a good stir fry which can contain many, many varieties of vegetables.  In keeping with the Asian spirit, I have also gone to my local “Dollar Store” and purchased something that I believed would assist me in fulfilling my destiny of enjoying the consumption of my Asian cuisine.  You guessed it…chop sticks.

Let it be known that I have never really used chop sticks.  I am an avid fork user and an occasional user of spoons.  Chop sticks have always intrigued me.  The first time I actually tried to use chop sticks, they managed…ahem…I managed, to make them cross over and actually fling a piece of meat off my plate onto an unsuspecting table.  After my fingers cramped over and over again from the exertion, I relinquished my wooden apparatus.  Basically, I woos-ed out and grabbed a fork.  For shame!  However, on this evening, I decided to attempt the impossible yet again.  Ha-zaaa!

I had procured a lovely beef and vegetable stir fry.  The beef was super tender (I had worried about over frying it).  The mish-mash of vegetables would have made a dietician proud:  broccoli, red onions, red peppers, baby bok choy, carrots, celery, snap peas, mushrooms, and crunchy bean sprouts.  Oh my!  A smorgasbord of delightful vegetables and beautiful colour.  I added some rice into the mix and was ready to proceed with my healthy feast.  I put my stir fried creation into a lovely bowl and proceeded to google how to hold chop sticks.  Yes I did.  I practiced and was ready to chow down on my homemade creation.

Hmmm, playing with the chopsticks felt easy…until I actually tried to pick up food.  My first attempts were quite successful.  I picked up the succulent beef and shovelled it into my mouth.  Success! 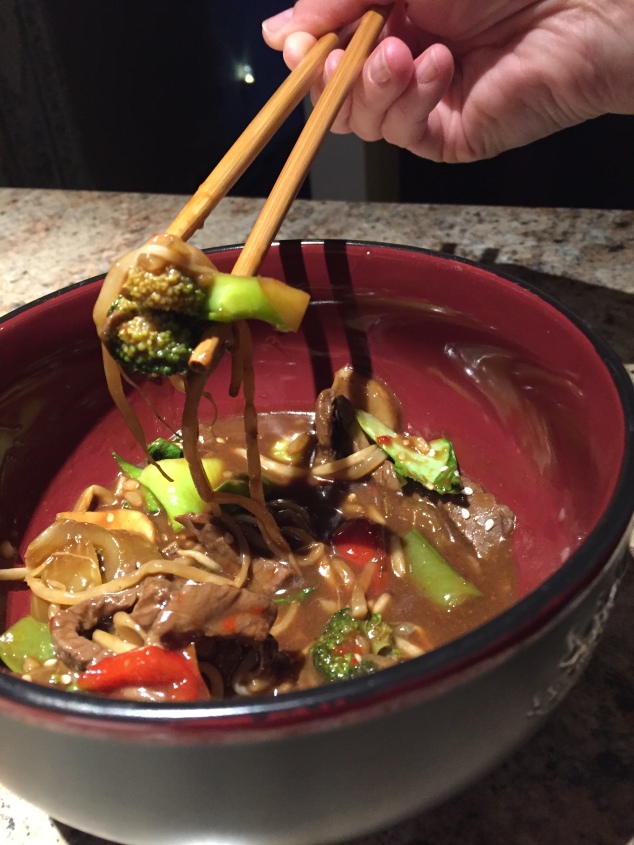 I think I became too cocky.  After the first few attempts I became more clumsy and tense.  My fingers were actually turning white from white-knuckling.  What had happened?  Eventually I changed over to the scoop method. 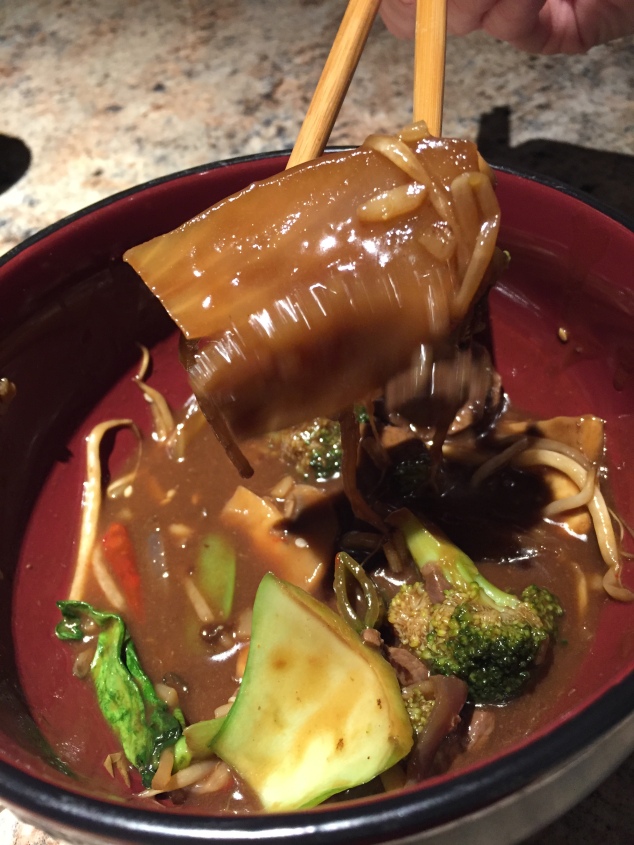 That worked for awhile and then I finally decided that I was super hungry.  Back to my reliable and trusty fork I went.  That gleaming dart of food happiness.  I devoured the rest of my meal.

I will not give up.  I shall try to use the wooden spikes again.  Try, try and try again.  I will not give up!  Well, I will give in if my fingers cramp up again, but after that I will figure out how to eat with these food fantasy sticks.  If I can’t figure it out on my own, I am sure someone can give me lessons.  There is probably a 3-year old who has it down pat.

The silver lining of this adventure:  It took me waaaaaay longer to eat my meal.  It gave me time to think and analyze my eating procedure.  As such, I actually felt fuller much quicker as I was not inhaling my food as I usually do.  It made me appreciate every flavour and every vegetable I was biting into.  Hmmm….perhaps I have found my new watchful eating plan.  Eat slower.  Digest slower.  Enjoy the time more.  I think it’s a solid future plan.

P.S.  If anyone can give me the “Dummy’s version” of how to use chop sticks I would be very, very grateful.