There are many types of fears:  fear of heights, fear of spiders, fear of drowning…to name but a few.  They all have their own “phobia” name.  I had this one fear, that some of you might also have had, called astraphobia or the “fear of thunderstorms”.  Allow me to share with you my mind-numbing anxiety and how I finally conquered this phobia.

The first lighting bolt / thunderclap storm that I can recall was when I was 4 years old.  Our family (mom, dad, us four kids) had gone to Croatia for a vacation (meet the relatives trip).  Being so young, I don’t really remember much.  The one thing I clearly recall is a lightning storm.  It was pitch black outside until the firebolt lit up the sky.  I was under an umbrella with someone (found out it was my mother) and we were trying to run quickly through the mud to get home before we got hit by lightning.  It was a terrifying experience and therefore etched in my mind forever.  That was thunderstorm number one.

The second thunderstorm that I can recall, took place after we had moved into our new family home.  I was 7 years old.  It was early afternoon when suddenly, the sky went from pretty blue to smokey, dark grey.  We had to turn the lights on in the house.  I was standing beside my mother and we were looking out the window.  CRACK!!!  Lightning streaked across the sky!  Seriously, there were probably 5 bolts that went from cloud to cloud.  A few seconds later BOOOOOM!  Thunder shook the house.  My mom held me and informed me that everything was going to be fine.  Then the lights went out.  I was shaking with fear.  Then all of a sudden…ICE PELLETS!!  I had never seen that before.  Ice cubes falling from the sky.  Hail was piling up on the dirt mountain in front of our house. 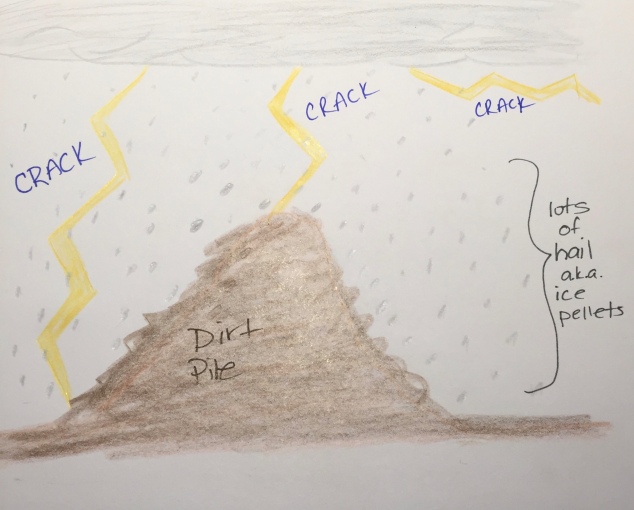 I started thinking that God must be mad at us.  (Yes, going to church all the time and listening to the bible stories of the “vengeful destructive God” in the old testament can really get a kid’s imagination going.)  Well, God wasn’t going to strike me dead on this day.  I bolted up to my bedroom and hid under my bed.  I would live!

Fast forward to when I was 18 years old.  Another never-forgotten storm.  I was back in Croatia.  This time it was me with my parents and younger brother.  We had gone to Medjugorje.  It was a pilgrimage for our Catholic family.  My mother wanted us to do the Stations of the Cross.  We were prepping for prayer when all of a sudden, the sky went black, lightning bolts came bearing down from the sky, the thunder shook the ground and I believed God was going to strike me dead.  (Oh yeah…that “fear of God” can really do a number on a catholic girl’s psyche.)  I looked around and my mother was gone.  Maybe HE struck HER dead!  Nope, mom reappeared from behind a statue saying, “I wasn’t even afraid of dying.”  Well good for you!  I had been terrified!

(I wonder if my mother is a descendant of Zeus or Thor.  Why?  Doesn’t it seem odd that when the worst (and my most memorable) storms hit my mother was in the vicinity?  Something to think about, you conspiracy theorists out there.)

Now, into my adulthood I was still not a fan of storms.  I had friends and co-workers tell me that if I learned more about lightning storms I would get rid of my fear.  Oh, I read about them alright.  I read about golfers being struck by lightning.  STRUCK DEAD!  Then there were the articles about water being a conductor of electricity.  So, after all my “helpful” research, not only did I fear the storms even more, I managed to kick my fear into high gear:

Then something changed.  Children came into my life.

Now, this is the last memorable storm I can recall.  We were vacationing at the cottage.  Everyone was in bed.  Suddenly, a strange sound came to my ears.  It was rain.  You could hear it moving closer from across the lake.  So pretty.  So relaxing and then…BLINDING LIGHT!!!!  BOOOOOM!!!  I freaked and hid under the covers.  Then we heard a terrified voice yell “Daddy!”  Wiseguy went to comfort the wee 7 year old girl.  I shook underneath my covers and then my brain yelled at me: “What are you DOING?!”

What was I doing?  What WAS my problem?  I had never perished in any other storm.  What was I so worried about?  I wasn’t a golfer.  So far, it seemed my mortality was not threatened.  My self-created reign of terror was officially over.

Afterward, when storms came around, I was the brave one and was there to hold our little princess.  I would tell her stories, or I would turn the radio on and we would dance.  Distraction…best thing to do during a storm.  After the storm was over, the beautiful rainbow would come out and all would be well again.

Nowadays, I do use electrical equipment AND take showers (not at the same time) when there is a thunderstorm going on.  The kids are all grown up, but I am now the official protector of my 9 year old fur baby, Sir Waldo; the fluffy shi-poo.  (Look at those ears pulled back and the crazy long “freaked-out-by-thunder” tongue.) 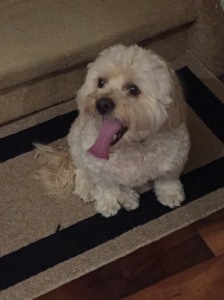 Being a descendant of Zeus and/or Thor (yeah, might as well go with it), Waldo and I no longer have to fear the sky storms.  However, I do still wonder sometimes…is it astrophobia or is God out to get me?