I like to live dangerously!  The thrill of zip-lining, or the rush of rock climbing.  Running a marathon.  Hiking through Europe.  Bike stunts.  Skateboarding tricks.  My goodness there are so many exhilarating moments!  Hot air balloon rides and white water rafting!  Honestly, the list is endless.  I am quite the daredevil and proud of it.  Hopefully, through my brave, adventurous life, you too will find that hidden childhood desire and live an inspiring and fulfilled life like I do.  Oh, by the way, I have never done any of these listed things, but I do find ways to live on the edge.

I ate bacon four times last week.  Yes, yes, I did and I’m not ashamed to brag about it.  Do you know what else?  I had a sunny side up fried egg to go with it.  There was also toast AND, oh yeah, it was buttered.  Booyah!  How do you like me now?  Uh huh.  I know.  I can almost palpably feel your envy at my exploits into endangerment.  Why am I being so foot loose and fancy free?

As a child I remember being unencumbered by my mortality.  I am sure you have seen kidlets jumping on a bed…up and down, and up and down, and…oops…BANG!  Too close to the edge.  Some bawling, either from actually bumping their head or just the shock of being misplaced.  Other than that they learn that they need to stay closer into the middle.  Lesson learned and more fun to be had.  How about the one year old that stands on the couch pulling at the blinds?  Yup, you know where this is going.  What makes them do such dumb things?

Are they dumb?  To us adults we can all become the Amazing Kreskin and foresee what shall happen (due to our own misfortunes and miscalculations), but to them it’s about exploring life.  That couch is their Mount Everest!  That bed is their trampoline!  Nowadays children have be monitored 24 hours a day, 7 days a week.  There is no longer places for them to play alone.   They can’t even go play on the jungle gym at the park without adult supervision.  I actually feel sorry for them.  Sorry that they can’t have that freedom of adventure that we had as children.

I believe my days in the summer went something like this:  wake up and have breakfast.  Out of the house so that my mother could clean.  Meet with kids in the neighbourhood and play until someone’s mother called for them.  Lunchtime!  Rush home.  Eat lunch.  Run out the door again to play.  Someone would hear the holler of dinnertime and again…home to be fed and then out to play.  No adults were with us.  No teenagers were with us.  We got to goof off and do silly things like fall out of trees or go wandering around the forest and be amazed to see a dead rabbit.  (Two little bites in the neck.  We thought there were vampires nearby).  We would come home sweaty, dusty, or muddy… and exhausted.

As we became adults the “fun” goofy things were replaced by order and rules.  School had rules.  Jobs had rules.  Society had rules.  So many rules and so little place to have fun.  We are told, in many different ways, how we should think and what we should believe.  Commercials tell us what will make us happiest.  Buy their product and your life will be full of sunshine, roses, and unicorns.  Ahhhhh…how great our lives will be.

Weird thing is, and you might have noticed this, it seems that this is kind of where we become like children again.  We beg and pine for something and know that our lives will be incredible once we get it.  That “it” could be anything from something expensive like a car or something as simple as a hamburger.  Now, if you really think about it, that lasts for a bit and then suddenly, it’s not good enough.  There is something else you absolutely need in order to make your life the happiest thing ever!  In most cases, the feeling goes away quite quickly.  How can you change this?

Find your inner happiness.  Find your inner love.  Once you find that crazy happy place, the world around you will seem so much better.  It won’t matter what material things you have because the rest of the world will just seem so much more beautiful, colourful, alive.  Those “rose-coloured glasses” of your youth were removed by well-meaning adults, but it’s time for you to put those on again.  The world is a remarkable place, but we tend to look at what is missing in our lives and not what we already have.

P.S.  Did I mention that egg was fried in the bacon fat?  Oh yeah…I’m living recklessly. 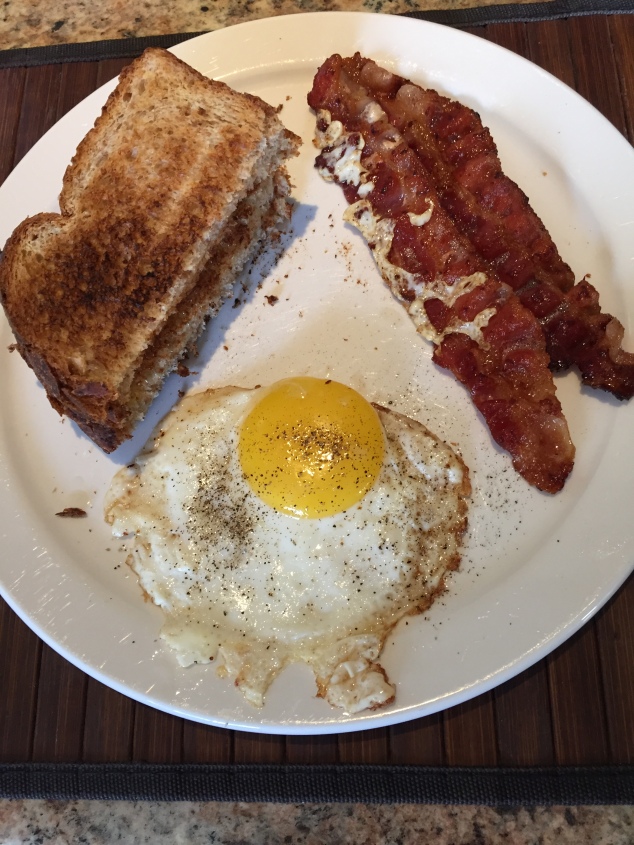 Well, becoming an aunt was a learning experience.  I remember talking to my first nephew and niece (only 17 months apart) and trying to impart words of wisdom without having them burst into tears.  Then later, I became a stepmother.  Mother might have been easier, don’t know, but stepmother, to tweens and teens, not easy either.  Lots of “behind the door” tears because I couldn’t show hurt or failure.  I lived and survived it and learned a lot from that experience.

Now, we’re at the fun part of  life.  Becoming a grandma at 42.  Although surprising, it was AWESOME!  I still have energy to keep up with the wee wonder-girl!  Our Kennie (who will be 2 years old at the end of august) is just hilarious.  Her two-syllable vocabulary and her imitations are amazing and fun and entertaining and adorable.  You can see how much time her mom spends with her.  She teaches her many things from singing to counting (by the way…counting starts like this..you say “one” and she continues with “two” …there is no “one” in her vocab.  Anyway, toddlers are fun.  Entertaining, fun, and…extremely tiring.

So, when Wiseguy told me that he got to babysit (ahem…hang out with) little Kennie, I was jealous…in a happy way.  It’s nice for him to have fun play time with little Kennie.

Honestly, kids have an amazing view of the world and what is determined as “fun”.  Grandpa was brilliant.  He decided that it was time to water the flowers in the backyard.  “Kennie do.”  Yup, the hose, full of water, was initially aimed at watering the flowers.  Then it became a fountain, spraying on Kennie and the puppies and everywhere BUT the flowers.  Fun? Totally!  What else did the dynamic duo do?

They ran around the house.  They drew pictures.  They ate fruit.  They played with the “Gogs” (aka dogs).  They had  lunch.  Then grandma came home at lunch and luckily got to put little Kennie down for a nap.  Nothing like watching a wee child sleep in peace.  Those little breaths in and out and that peaceful look on their face.  Absolute comfort and happiness.

After work, Grandma came home to the welcoming, happy face of wee Kennie and “come”…time to play.  We forget to play.  We adults play, but sadly, it’s usually a play to win situation.  Grandma just had to play with Kennie by dancing.  A little boogie woogie and giggling with mommy.  Then I had Kennie help set the table because “Kennie do” was all I heard.

Grandpa Wiseguy was happy.  He got to have fun playing games with the pre-two year old all day.  She had a two hour nap.  She scarfed down lunch.  She gave lots of hugs and held his hand and helped water the flowers and played drums and just gabbed and laughed and played with grandpa.

After Princess and Little Kennie went home after dinner, I got a lovely text message “out like a lightbulb”.  I was so happy that Kennie had a  wonderful day with both grandpa and great-grandpa.  I texted back:  Grandpa out too.